From a security perspective, it goes without saying that synagogues and religious institutions in this day and age need to be cautious about security.  There are numerous strategies that I've seen exployed at the many shuls I have visited on this Kaddish tour, including live security guards, cameras, and pass codes, among others both visible and not.  These institutions want to ensure that the individuals entering their premises are there for genuine and appropriate reasons.  And they have every right to be selective in whom they admit and whom they do not.

From a Jewish perspective, it is a beautiful mark of community that someone can join a minyan anywhere in the world and find familiar texts and rhythms included in the service.  I am constantly I awe of how the routines of halacha, and minyan in particular, bring together individuals with diverse languages, perspectives and experiences to achieve a common goal.  I continue to be amazed at how the word "Kaddish" is a universal password that elicits warmth, compassion and welcome.

Except when it's not...
And when that exclusion is a function of circumstance and security features operating all too well.

Last night, my fiance and I tried to catch a late Maariv at a synagogue we had not attended before.   We elicited help via Facebook to identity a likely minyan in our target area.  As we arrived (on time due to distance, rather than early as is my usual practice at new venues), we observed several men walking toward the entrance.  We felt we could relax, we made it in time. We parked the car and approached the entrance ourselves.  Unfortunately, by the time we reached the doors, they were locked.  Ringing the bell on the intercom did nothing, as the office wss closed at 9:45 PM.  There was no number pad in sight to try the usual suspects.  I even approached someone sitting in a parked car, having no idea if he would be friend or foe, to see if I could glean any information.

I was not looking for the pass code.  Why would I, a visitor on one occasion so far, need access to sensitive security information?

What I did wish, was for a way to alert the people inside the minyan that there was someone outside who wanted to recite Kaddish.  We had no way to reach anyone or seek help until the service was over.

For ten minutes we stood outside, trying every means we could think of to gain access.  When I finally saw movement in the lobby, I sprinted to the door to ask to be let in to say Kaddish.  I was answered with regret that the service had ended.

To the credit of the congregation, when they heard what happened, almost everyone there filed back into the chapel to say a chapter of tehillim so that I could say Kaddish at the end of it.  I am grateful for this kindness and show of support and acceptance after the unfortunate ordeal.

And now I wonder... what is the solution?

If this happened to me, it can happen to others, and I can't imagine I'm the first to miss a service for lack of communication with the minyan.   The reality is that while catching a minyan is not a life and death situation, minutes still matter and emotions are particularly raw.

So perhaps the synagogues that rely on passcodes for access might consider a sign for visitors, with a phone number of someone inside the minyan, or a bell, that can alert those inside that someone would like to join.  The synagogue office is typically not open during minyan times, so an alternative point of communication is important.  Perhaps this visitor information about communication could also be posted on the website.

Ultimately, the question remains for each institution to wrestle with: how can it ensure the security of its members while also opening the door to visitors who genuinely wish to connect.

It's so hard to write these words today.  My uncle, Paul Kalish, passed away this morning at home after a valiant 10 months battling  gl... 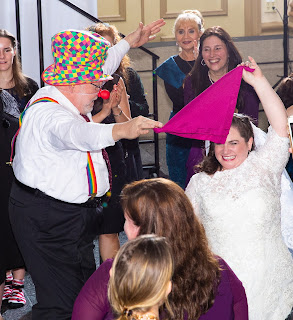 Amy Fechter
Amy Fechter is a "learning strategist" who takes lessons from her own experiences in attempt to make other people's lives just a little bit easier. As the founder of Strategic Hebrew, Inc., Amy is pioneering the use of engaging language encounters to build problem solving skills (see blog: "Strategic Hebrew"). Her blog "Processing Jewish Mourning" offers tips to mourners, clergy and friends about the Jewish mourning experience. The upcoming "Good Friend's Guide to a Jewish Wedding" will offer tips and hacks for friends of the happy couple who want to contribute to their happiness leading up to the wedding and on the day itself.